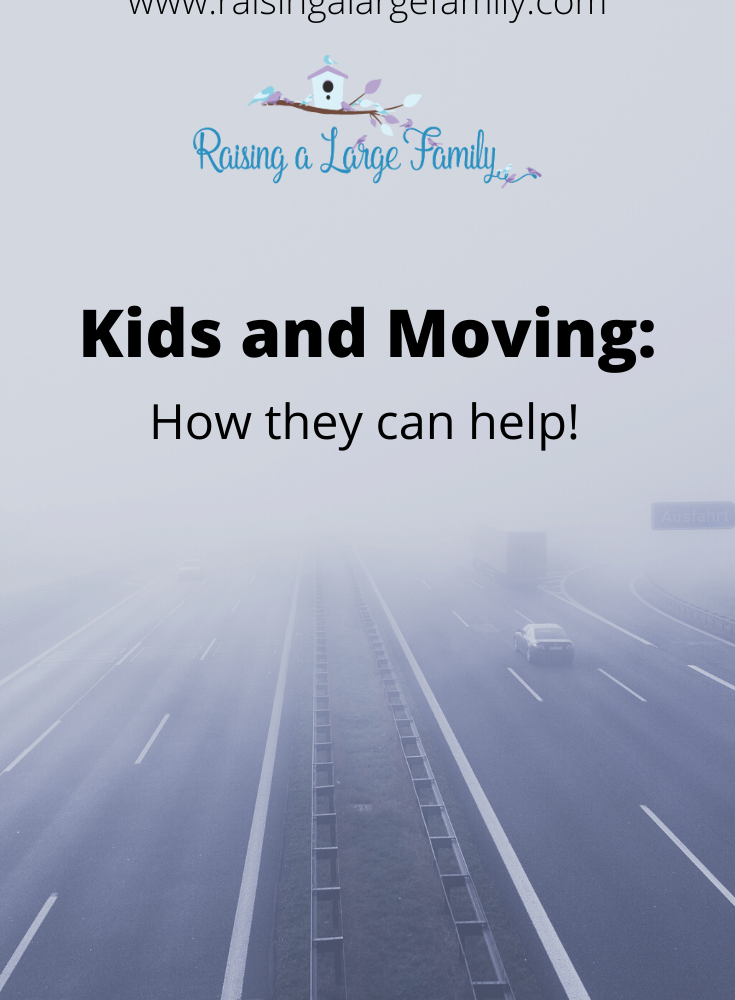 We lived in our home for almost twenty years when we decided to move.  Without our children’s help, it wouldn’t have gone as smoothly as it did. We transitioned from a 2,167 square foot home into a less than 400 sq ft fifth wheel.

To be honest, it was very overwhelming.  We spent over a year just working on the logistics of it, putting things into storage in another state, decluttering and reducing all of our possessions, donating SO MUCH, and not to forget the various trips to the dump.  And that was just for the moving aspect.

We also completely redid our home to help us get the most we could when selling it.  Without the help of our children (painting, flooring, tile work, landscaping, etc.), we wouldn’t have been able to sell it for full price just six days after listing it!  That’s another post though…

My children did the majority of the packing and cleaning of our home.  Everything they did was under the guidance of Ed or I.  We would give them some instructions for the day for them to do once they were finished with their schoolwork.

Work doesn’t have to be hard and can be fun!  They played music and had contests with each other on who would get the most done, etc.  They were excited to move and were seeing all of this as a little adventure!

If you don’t know about our Partner System I highly recommend you read my post on it and start implementing it into your family’s structure.  It was HIGHLY VALUABLE all throughout moving.  To put it simply, the older child took care of their stuff and their partner’s stuff, giving you more time to take care of your stuff and the misc. moving chores (for example, searching for and buying a fifth wheel to move into, like in our case).

Each older partner went through their own clothing.  We haven’t ever really had a ton of clothes so this wasn’t too overwhelming.  They basically looked over everything and threw away all that was stained or had holes in it.  Then they counted up what was left and kept track of what they needed, due to getting rid of some of their worn clothing.

They then did the same for their younger partner.  This included making sure everyone had a nice church outfit and shoes (which were always missing or didn’t fit anymore).

‘Treasures’ were packed by the older partners.  The only things that weren’t packed were immediate/can’t do without items (at least for the next 6+ months).  These ‘can’t do without’ items had to be approved by me before they went into the fifth wheel.  Otherwise, if we were just moving into another home they also would have also been packed.

A few examples of things I had our littles do was organizing their crayons and pencils.  We had a coloring cabinet that was adjacent to the dining room.  It seemed to always be a mess, full of coloring books, boxes, and miscellaneous sheets of paper.  We emptied it, had the littles put all the crayons in one box and the pencils in another.  They then stacked up the coloring pages separately from the coloring books.

At this point, it was best to give them another job, basically because it was time to throw away some stuff and it would happen with less drama if they weren’t around.  😉

I have one little boy that is a well-known packrat.  We’ve often found him picking garbage out of the garbage can with the idea of repurposing it for some project of his.  I appreciate his ingenuity but it doesn’t have a place when moving, especially into a fifth wheel.

I love Trello.  We use it for home organization, grocery shopping, my husband’s business, even while organizing our move to keep track of all the miscellaneous tasks I knew I’d forget.  It is a lifesaver.  If you don’t have it I highly recommend it.  It’s only all our phones as well as our computers.

Every box we packed and put into storage is listed in Trello.  It was a little time consuming but highly worth it in the long run.  All the older kids, once a box is finished and ready to be loaded, would give the box to one of the two girls I had assigned to this task organizing task.

The girls would check to see what was packed in the box and then label it according to its’ contents.  For example, adult clothing is labeled as an A box.  If it is the first A box to be entered it will be sharpie’d as A-1 on both sides of the box.  Then in Trello, under the A card, my daughter would type A-1 and list the contents of the box (mom’s size large clothes, for example).

How does this help and is it worth it?

You may wonder if this is being too detailed.  It does take a little work but I guarantee you that it is worth it!  When we go to move the boxes into our new home she will be able to tell whoever is carrying the box EXACTLY which room to put it in!

Plus, if you need something and don’t feel like unpacking all the boxes to find it you’ll be able to know which box the item is in without opening any of the other boxes.  I’ve already found this useful as some of my more ambitious daughters (hmm…Catherine) like to pack items I was originally going to put into the fifth wheel.  It helped me rescue more than one item from being put into storage.

And last, but not least, there was getting the home cleaned up for the new owners.  I admit that it is definitely easier to clean an empty home than a home full of our stuff, but the kids did such an awesome job with this.

After everything was packed they each cleaned up their own room.  Then, the room was off-limits (not that there was anything much to do in there anyway!).

We assigned chores/rooms to various kids and gave each a verbal list (although some days I wrote down a list so I KNEW nothing would be forgotten).

Odd little jobs were usually given to the little kids.  The favorite job for our littles was cleaning the baseboards.  I figured they were the closest to them and so could do the best job!  I just gave them a damp rag and let them at it.  Hand mopping the floor was also a great job for all the little boys.  After all, many hands make light work.  😉

Moving is a ton of work!

In a large family not only is there usually more stuff to pack and deal with but there are also more helpers.  I believe we need to help our children understand the importance of working together towards a common goal.  Not only that but children need to see themselves as valuable to the family.

It would have been so much more difficult and time-consuming if my children weren’t there to help us.  I encourage you to help your children see their value in your family! 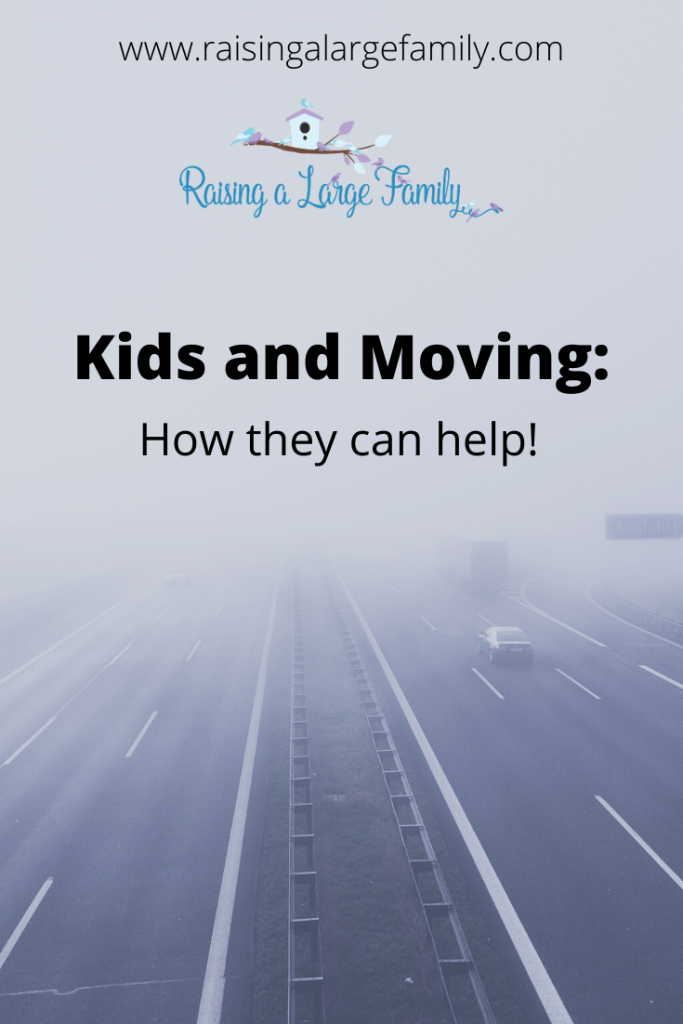