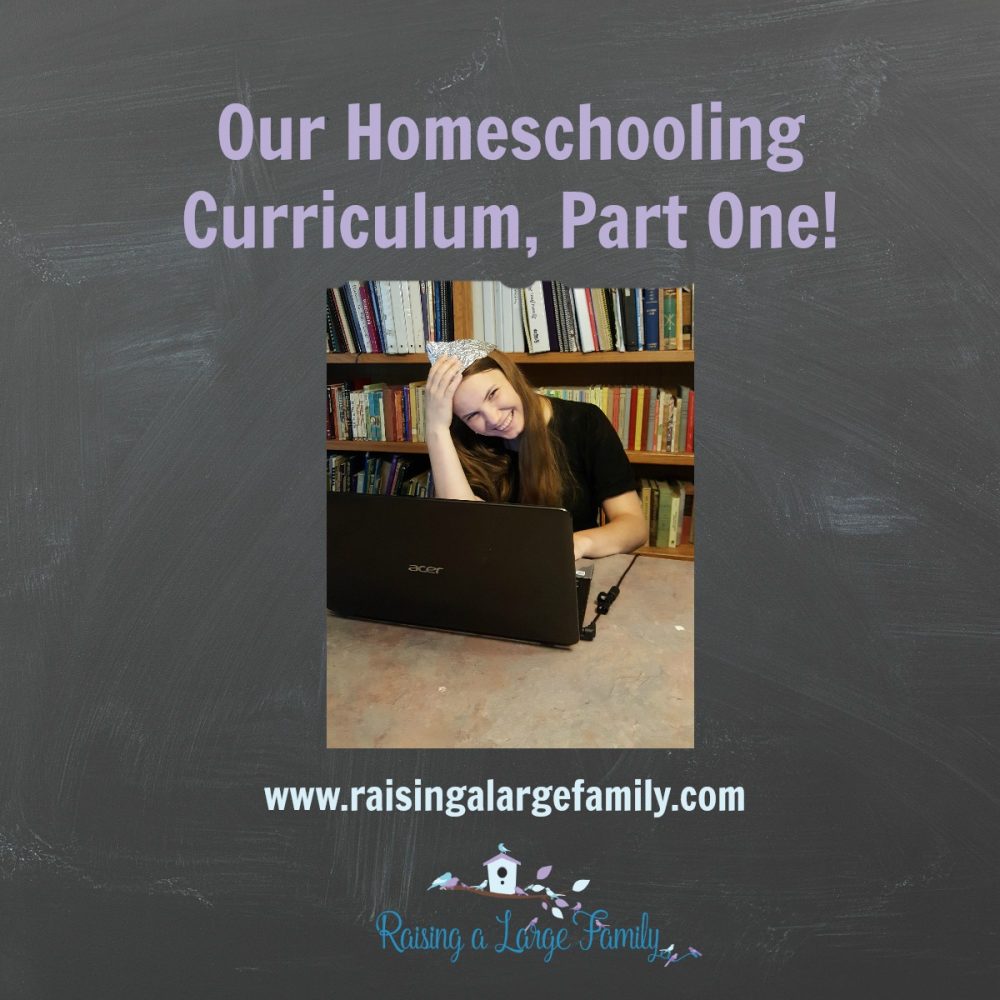 When homeschooling we are often asked what we teach our children.  What curriculum do you use?  Do you use a curriculum?  How do you know if it is well-rounded?  I’m here to tell you that it’s time to relax.  The is part one of what I teach my children when I school them at home. You’re going to be surprised as it’s not what you’d think.  🙂

Homeschooling doesn’t have to be like public school.  Just because the government says your children must sit in desks and spend a certain amount of time doing each subject while facing a chalk/white board doesn’t mean this is the best way to learn.

When we first decided to home-school we had four children in a private parochial school.  They were already used to the structure I speak of above.  As my husband and I were both public schooled, that’s what we were personally used to as well.

This is going to be a series of blog posts that will show you what we teach our children.  I’m planning separate posts on how we teach the Basic Three R’s, Life Skills, and our Unschooling method.

In The Beginning, Their First Day At HomeSchool

The first day at home was very similar to what they experienced in their past school.  We had them wear ‘uniforms’.  They started their school work at a certain time and they all had to sit at the kitchen table with their books in a box next to them.

They followed the curriculum for the day that I had laid out for them.  They received breaks with an occasional snack but, due to the beauty of not having to mess with other students, changing classrooms, etc., they finished their daily schoolwork by lunchtime.  We loved it.

It took us many years before we realized that this wasn’t the ideal way to teach our children.  Actually, it happened more organically than anything.  It evolved from our public school mentality of schooling to the more natural method we follow now.

HomeSchooling At The Waggoner’s, Now

My children still learn the Basic Three R’s, of course.  But, they only learn it from a textbook if they’re having a difficult time with a concept or two.

Except with math.  This is where having a textbook is important to me.  My children follow the Saxon math books through Advanced Math.  If they want to go further then, of course, I let them and will gladly get them whatever they need.  However, I’ve only had one child want to go further, so far.  She’s been using Kahn Academy to learn Calculus in the morning’s and is actually graduated.  She graduated when she was 15.

Many may think that means she’s smarter than most kids.  I don’t know.  Maybe she is ‘smarter’.  However, I think most kids are capable of what she did, they just aren’t given the opportunity.

The Beauty of Learning Out of the Public School Structure

When a child is in the ‘system’ they have to follow the rules of the system.  There has to be that constant order and control.  Things can get out of hand very quickly when you have a building full of young children that (in most cases) don’t want to be there.

At home, learning just happens.  The child gets one on one attention when they need it.  If they don’t need it then they just finish whatever schoolwork assignment you have them doing without having to wait on anyone else.

My son is a quick learner.  You teach him something and he learns it quickly.  When he was in 5th grade (the year we pulled him out) he was in a classroom with a bunch of children that liked to play.  Tim is a very task oriented person that wants to finish his work first so he can move on.  And, he wants to do it quickly.  He doesn’t like putting things off usually.

Well, the students in his class didn’t like to do their homework and they didn’t like to pay attention during class.  The teacher was relatively new and didn’t realize how manipulative children can be.  They had her tied around her little finger, unfortunately.

Since I wasn’t his teacher I didn’t realize all this was going on until it was too late.  At least for that school year.  When the school year was over he had only finished half of his math book.  This was all because the other students didn’t understand the current lesson and the teacher wouldn’t move forward until everyone had a complete understanding.

She wouldn’t let him work on his own, either.  It would make it difficult for the teacher if the students weren’t all on the ‘same page’.  He basically sat there and drew during his math class.

Once we brought him home he learned quickly and graduated early as well.  He also went on to be the youngest licensed property manager in Oregon.  Another beauty of home-schooling.  You can follow your interests regardless of your age.  He went to the local community college, became licensed and started helping his dad in the family business.

I Think Children Are Being Held Back

I think that most kids are capable of way more than what is being expected of them. They are just not being given the opportunity to excel due to having to follow the structure we, as a nation, have imposed upon them.

The first thing I tell a new home-schooling parent is to RELAX!!  Don’t stress about every little assignment, text book, or extra-curricular activity out there.  Your children are sponges.  They are constantly learning!!  If you give them the proper ‘ingredients’ they will be learning just being awake.  Seriously!

Ditch the electronics (video games, especially!).  Ditch most of the textbooks, as kids don’t learn from the majority of them anyways. Ditch the TV.  Screen their movies (and all their electronics), so only clean and pure entertainment is absorbed into their minds (we use ClearPlay when we watch movies). And, ditch the constant, minute by minute structure.

You won’t regret it!!

What is your homeschool day like?  What has helped your children learn the fastest?