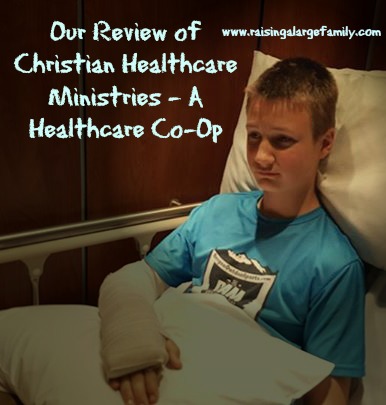 I personally haven’t had health insurance since high school.  When we married my husband was making just enough money for us to barely pay the bills, let alone the ‘extra’ expense of health insurance, as we saw it.  Our family waited 20 years before getting coverage.  And, just like a lot of families out there, particularly self-employed families, we signed up to avoid the fines given due to Obamacare.  We signed up for Christian Healthcare Ministries.

We can’t stand the whole idea behind Obamacare but I want to make it clear that this isn’t what this post is about.  We have had a good experience with this company/ministry and just want to express that to those that may still be looking for a provider.

I was on the phone complaining to a friend of mine about how in the world we were going to afford healthcare.  She told me about a healthcare ministry she found that was relatively inexpensive and that she liked and was using.  It’s called Christian Healthcare Ministries, or CHM.

To be honest, when we first joined it seemed too good to be true.  The monthly expense was much less than paying the fines from the government, and since it qualified under the Obamacare (ACA) requirements we decided to just sign up.  If it was too good to be true it was at least a cheaper way to deal with the government requirement of having healthcare.  It was either our monthly premiums ($280) or the yearly fees attached to our tax papers (For 14 people?  Let me get out the calculator!).

Some months after we signed up we found out I was expecting Judith.  About halfway through my pregnancy I contacted CHM to find out how the payment reimbursement actually worked.

I was on the Silver program (find out about their 3 individual programs here).  This program covers midwifery care (they’ll pay up to $2,500) even with a homebirth midwife.  This was particularly exciting for us as we’ve always paid for my births out of pocket or by working them off by updating our midwife’s home in some way.

I asked my midwife if she’d give me an invoice/bill a little early so I could submit it to CHM and get the money back to pay her in a timely manner, preferably before she was born.  Of course she did and I uploaded it on their website in their member portal.

That was all I needed to do.  Nothing else.  I was hesitant to believe it and so just waited.

Two and a half months passed.  Their website says to allow for three but this is a long time to wait when you’re waiting for a check in the mail, you know?  Especially one that you’re reluctant to believe is coming.

But, the check came.

I received the check in the mail made out in my name.  CHM was trusting that I was going to pay my provider.  I guess there is no liability on their part to make it out to me since I was the one that actually owed the money.  It just surprised me though.  I was fully expecting the check to be made out to my midwife and mailed to her, not me.

I cashed the check and paid my midwife.  No questions were ever asked of me.  Everyone was happy.  🙂

Then…  Marcel Broke His Arm.

Our family has never experienced much in terms of medical sickness that required a hospital or extensive medical care.  Therese had appendicitis but other than that we only had stitches and sniffles in the past to deal with.  When caring for 14 people, one hospital stay just doesn’t seem like much.

Well, as many of you know our family loves to roller skate.  We skate almost every week and have really benefited from the extra activity.  My children have become very capable skaters and tend to be a little over confident, if you know what I mean.

Christina and Marcel love to horse around out on the rink.  Marcel fell from one little incident and Christina landed right on top of him; on top of his arm to be exact.  She even felt it snap under her knee.  It had a very distinct sound and feeling, she told me.

He was taken to the emergency room, x-rayed, cast, the works.  There were two breaks in his arm, fortunately missing his growth plate.  It took a little over six weeks before he had his cast taken off. 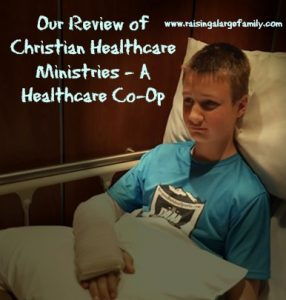 During that six weeks we started receiving bills.

As per what the co-op asks you to do, I started calling all the providers to negotiate them down.  From every one of them I was told that if I paid with a credit card they would knock off 30% of the bill.  That’s a huge savings!

I was so impressed with their speed!

And, to top it off, because I was able to negotiate the bill down so much they counted that amount as my personal responsibility/deductible.  Meaning, I paid NOTHING out of pocket for my son’s arm, not even for pain killers (that was also reimbursed).  Technically, because I paid with a card I receive rewards on (not intentionally, just the card we use for personal expenses), I made $48.05 in credit card rewards.  How funny is that!

I recommend Christian Healthcare Ministries to any Christian that is looking to save money on their health insurance.

I also just found out that CHM is a Better Business Bureau Accredited Charity and the only health cost sharing ministry heard on the Dave Ramsey show, a show I recommend everyone listens to!

As an added bonus, they will gift you an entire month of free premiums for any person that you refer that signs up for the co-op.

Every member is given their own referral code.  Once signing up you can talk to your family and friends and maybe get some free healthcare as well by joining this ministry!  God bless!