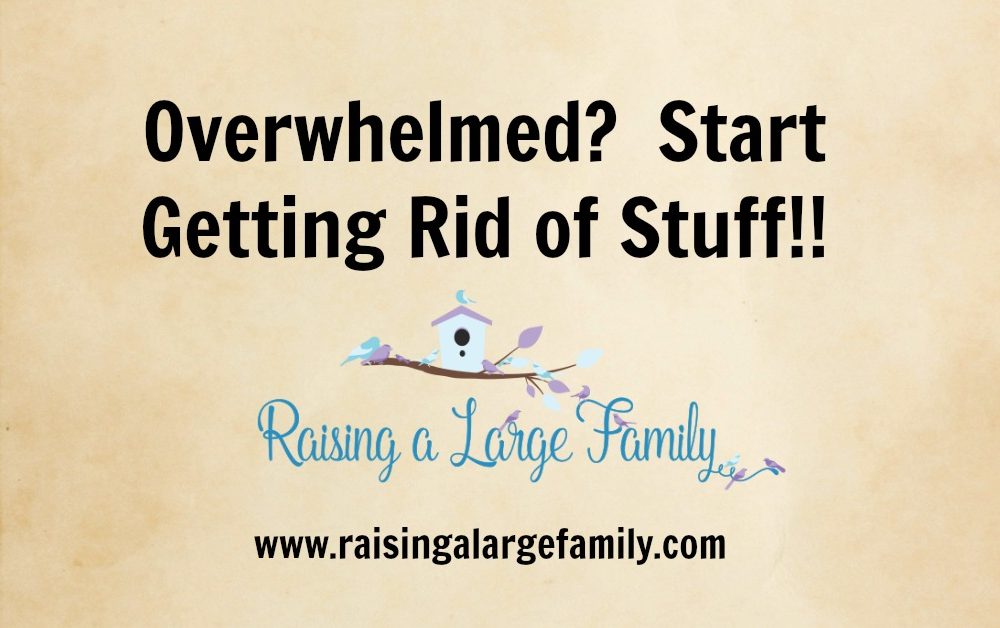 I am sick of stuff!  Whenever I feel overwhelmed and burdened one major thing I do is look around me at the stuff I have and decide just how important all of it really is.

Right now we are going through everything.  When was the last time we used it?  Am I likely to use it again?  Can I use something else instead of this item?  Just how awful would it be if I got rid of it?

A movie that really got me thinking (yes, I know that Hollywood isn’t realistic, but still…) was “The Last Samurai”.  If you’ve seen this movie think back to the woman’s home.  There was very little furniture, clutter, wall hangings, etc.  Yet they had pure happiness.  They worked outside, focusing on bettering themselves instead of dealing with their possessions.  Again, I know this is just a movie.  However, there is a lot of truth in this lifestyle.  Just how important is all of our stuff?

Just the other night my husband and I walked around our property.  We have lived on the same two acres for the past 17 years.  We are not junk collectors.  Actually, in our friend’s eyes, we are exactly the opposite.  However, we were amazed at all the stuff we found that we hadn’t used in years.

Guess where that stuff is now?  It’s listed for sale and is selling fast!  Here’s a tip I just learned, by the way.  If you have something for sale list it on Facebook Marketplace.

I’ve always listed on Craigslist because it was free and we saw results.  So, to start I listed a bunch of items on Craigslist about a month ago.  I only sold one item.  I saw people listing on FB Marketplace and so tried it.  Wow.  I was overwhelmed with the responses I received!  Now I’ve been listing 5-7 things every week (and will continue, at least until I feel sufficiently de-cluttered), and most everything sells for what I’m asking. Now I no longer bother with Craigslist.

If the item is shippable, I list it on Mercari.  I’ve been selling an average of $500 a month of stuff around my home that I no longer need but still has value.  The above link will give you $10 off your first order and $20 when you make your first $100 selling on Mercari.  I highly recommend them!

I’m going to keep listing items as long as I’m finding things I want to sell.  While I’m doing this I’m cleaning out my pantry, throwing away stuff I don’t think ANYONE would want, and trying to just simplify.  My brain and patience need this. 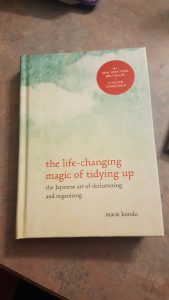 I’m on a FB group for big families on living the minimalist life.  They introduced me to a new book and idea called “The Life-Changing Magic of Tidying Up”, by Marie Kondo.  According to the cover, it is about “the Japanese art of de-cluttering and organizing”.  Sounding a little samurai-ish!  😀

I received the book in the mail yesterday so I can’t tell you if I like it or not.  However, I can tell you that I love what her ideas are doing for other people.  And, to tell the truth, when my kids saw it they had mixed reactions.  Some saw it and said, “it looks like a mom book”.  Hmm, I must like organizing.  The rest saw it and got a little bit nervous!  My 15-year-old son is one of the nervous ones.  I told him not to worry.  I was starting with his room first.  Hehe…

Does anyone want to join me?  It’s very liberating!!

Looking for a little extra help?

If you’re looking for a little bit more help because you are just ‘feeling the chaos’ I made a shortlist of items I recommend doing during times of stress and overwhelm; a type of checkoff list that will help you not feel further behind and still make sure you’re getting the basics done.  If this would be of help to you please get the download here.